Next Generation Robots:
The New Era of Robotic Welding

Companies are always seeking opportunities to improve productivity through process automation, and due to their repetitive nature, welding tasks are often an excellent option. Many industries employ robots for welding operations and some common forms of robotic welding include resistance, spot, arc, TIG, MIG, laser, and plasma welds. The primary benefit of automated welding is the ability to rapidly produce high-quality welds, increasing fabrication efficiency and consistency as well as safety on the shop floor.
In recent years, significant advancements in automation technologies have been made, most notably with Industry 4.0 and the Internet of Things (IoT). The IoT is the use of the internet in physical devices and everyday objects. IoT is a very broad concept as the “thing” can refer to a wide range of objects including a robot. IoT machines are equipped with internet connectivity and other necessary hardware like sensors or processors that measure and report data via the internet. This data can be a single piece of information from a given sensor, or more complex information from equipment that collect multiple data simultaneously from various inputs. Companies across various industries are using the IoT to operate more efficiently, access real-time data to enhance decision-making, and add value to the business.
IoT and other advancements have enabled a new era of robotic welding. Below are some of the innovations found in the next generation of robots.

Manufacturers often feel they are in a constant state of “reacting” to various fabrication issues, and have historically used preventative maintenance to reduce the potential for equipment failures and unexpected downtimes. The IoT is revolutionizing manufacturing by enabling the efficient collection of - and access to - large quantities of data instantaneously – and the result what is called “smart manufacturing”. Smart machines collect and use data to monitor their own health, alerting of potential failure points or anticipated issues based on the data collected – a process known as predictive maintenance. The IoT enables predictive maintenance, which is based on real-time condition of a specific piece of equipment, compared to traditional preventative maintenance which is generally based on averages and historical data of equipment.
Furthermore, smart machines, such as those utilized in robotic welding, are able to create a signature of a robot’s health, such as the amps pulled during a given task. When the robot’s signature varies from the norm, artificial intelligence predicts an issue and allows manufacturers to proactively schedule downtime for maintenance and repairs before the equipment suffers damage or a failure that would unexpectedly stop production. When it comes to robotic welding, end-of-arm-tooling effectors are now often equipped with sensors that are IoT connected for real-time data collection and optimization. These sensors can also give robots a perceived sense of touch and sight during welding operations, improving weld performance real-time. This level of detail is extremely valuable as it optimizes welding performance and improves consistency – saving fabricators and customers money and time.

Significant developments have been made in the software that supports robotic automation. Programs are more user-friendly, and are more easily programmed to execute complex welding jobs such as tubes or other circular shapes that require curved welds. Another advancement is the ability to program offline. Offline programming allows fabrication activities to continue while new programs are entered into the software. This may not seem like a big deal but it is a huge advancement. Instructions for future robotic welding can be programmed into the equipment without interrupting the robot’s current welding task – saving time. Also, in the past, robotic welding was often reserved for large volume fabrications; however, with offline programming, small volumes and individual parts are more feasible and economic.

On the Fly Welding

Historically, robotic welding tasks required the robot to get into the proper position and come to a complete stop before welding was initiated. In the new era of robotic welding, there is the concept of “on the fly” welding. As the name implies, welding is started before the robot comes to a stop. On the fly welding is being developed for laser as well as MIG welding. In the example of laser welds, the laser is engaged and welding begins once the weld is visualized by the scanning equipment – all while the robot is in motion and is still moving into position. The benefit of this technology is the reduction in cycle time – even a fraction of a second adds up to a huge time savings when performing a repetitive job over time. 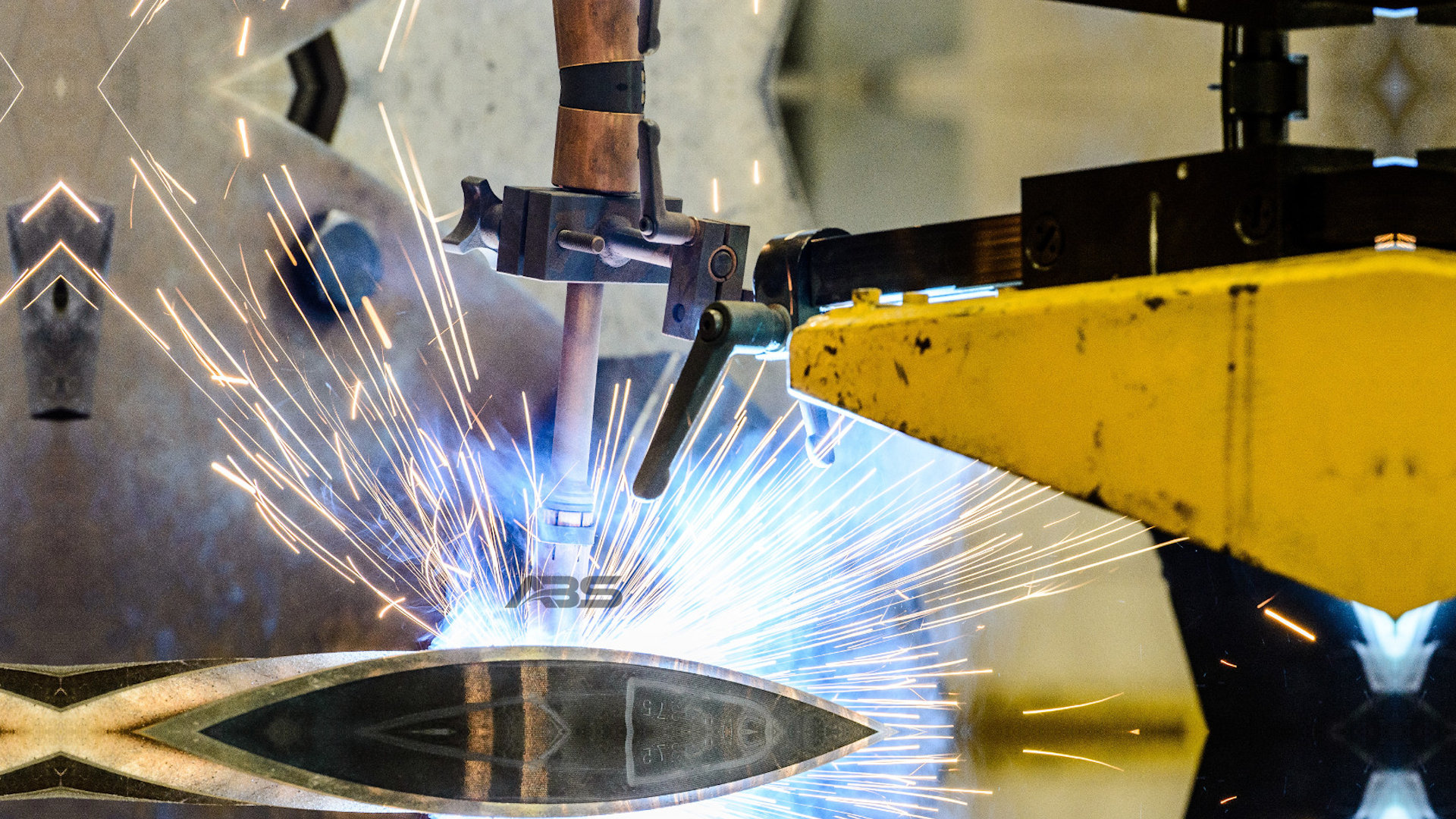 Established in 1971, ABS Machining has grown to become the recognized global leader in large machining, fabrication, and assembly for OEMs. The key to our success has been exceptional people, unparalleled facilities, and an unwavering commitment to quality. Our people are experts in their given field. Their expertise is matched only by their passion for serving our clients. We continue to invest in our people with education programs, cross training and in our internal accredited apprenticeship center.
ABS Heavy Fabrication is a full-service facility certified to CSA47.1 (AWSD1.1) and ASME Boiler Vessel B31.1 and 31.3 standards. Our welders are certified by CWB/AWS and ASME, and are fully trained on flux-core, gas metal, submerge arc, tig and stick electrode welding techniques. Individual customer requirements are followed and enforced in conjunction with our in-house certified weld inspectors. (CWI Level 2's). Below are some of our fabrication services:
We offer a unique combination of medium to high volume production machining and welding services. Our team is committed to producing an un-paralleled level of quality and throughput, while also focusing on cost. We also offer secondary services such as mechanical assembly, making ABS a true single source solution for the most challenging programs of today and for the future.
Contact us today to see how we can help with your fabrication project, or give us a call at 1-844-227-6224.
PREVIOUS
NEXT
Articles
CNC MACHINING · FABRICATION · ASSEMBLY

ABS is your trusted CNC machining partner – and clear communication of part details upfront helps ensure the partnership is maximized.

What is Non-Destructive Testing?

The team at ABS assemble custom products and help reduce your overall assembling cost based on your specifications.

Why Fabricators Rely on Robotic Welding

Our high level of production quality enable us to deliver consistent products to customers – becoming their trusted long-term fabrication partner.

A Deep dive into
CNC milling

It is crucial to select the right tools for each job and rely on the expertise of a trusted CNC milling partner, like ABS
MORE POSTS

ABS is your trusted CNC machining partner – and clear communication of part details upfront helps ensure the partnership is maximized.

What is Non-Destructive Testing?

The team at ABS assemble custom products and help reduce your overall assembling cost based on your specifications.

Why Fabricators Rely on Robotic Welding

Our high level of production quality enable us to deliver consistent products to customers – becoming their trusted long-term fabrication partner.

A Deep dive into
CNC milling

It is crucial to select the right tools for each job and rely on the expertise of a trusted CNC milling partner, like ABS

When looking for a CNC machining partner, it is important that OEMs look for a shop that delivers high-quality parts on schedule and offers value.

What Is Lean
Manufacturing?

When looking for a CNC machining partner, it is important that OEMs look for a shop that delivers high-quality parts on schedule and offers value.

We start and end the project – from the concept and design phase through machining, sub-assembly, and final assembly operations.

Why TCO Matters
in Machining

Impact of Industry 4.0 on Heavy Fabrications

Smart manufacturing is changing shop floors by enabling the acquisition and accessibility of far greater amounts of data, at far greater speeds, and far more efficiently

The Latest Trends
in CNC Machining

Meeting and Exceeding Expectations through Quality

ABS employs these practices throughout our quality management program, enabling our team to deliver outstanding product quality for our customers.

The goal of DFM is to reduce manufacturing costs and avoid costly disruptions without sacrificing quality or performance.

CNC machining has revolutionized modern-day manufacturing and it's employed by machine shops in most industries.

The use of robotic welding machines removes operators from higher risk processes.

Benefits of partnering with an integrated CNC machining company, like ABS

Smart manufacturing can be utilized with a variety of equipment including CNC machines.

SAW provides the highest deposition rates and the deepest penetration of any arc welding process.

THE NEW ERA OF ROBOTIC WELDING

We offer a unique combination of medium to high volume production machining and welding services.

HOW IS LARGE PART MACHINING DIFFERENT?

Work with an experienced team, like ABS, who have the necessary facilities and proven know-how for heavy machining.

Our Heavy Fabrication is a full-service facility certified to CSA47.1 (AWSD1.1) and ASME Boiler Vessel B31.1 and 31.3 standards

5 Tips on How to Choose Your Machining Partner

A true partner asks for input and listens to customers – offering solutions that ensure both parties are aligned and satisfied!

WHY QUALITY IS KEY TO SUCCESS IN MACHINING

ABS quality professionals work closely with each customer to ensure all their unique requirements are met or exceeded.

Our massive fleet of machines and automated welding systems has delivered solutions to the most technically challenging projects.

BENEFITS OF RESHORING TO NORTH AMERICA

ABS Machining has grown to become the recognized global leader in large machining, fabrication and assembly for OEMs across North America.

Our CNC Boring Mills, Vertical Turning Lathes and Table Type Boring Mills are supported across six facilities in North America. They house over 50 cranes with lift capacity of up to 160 tons. 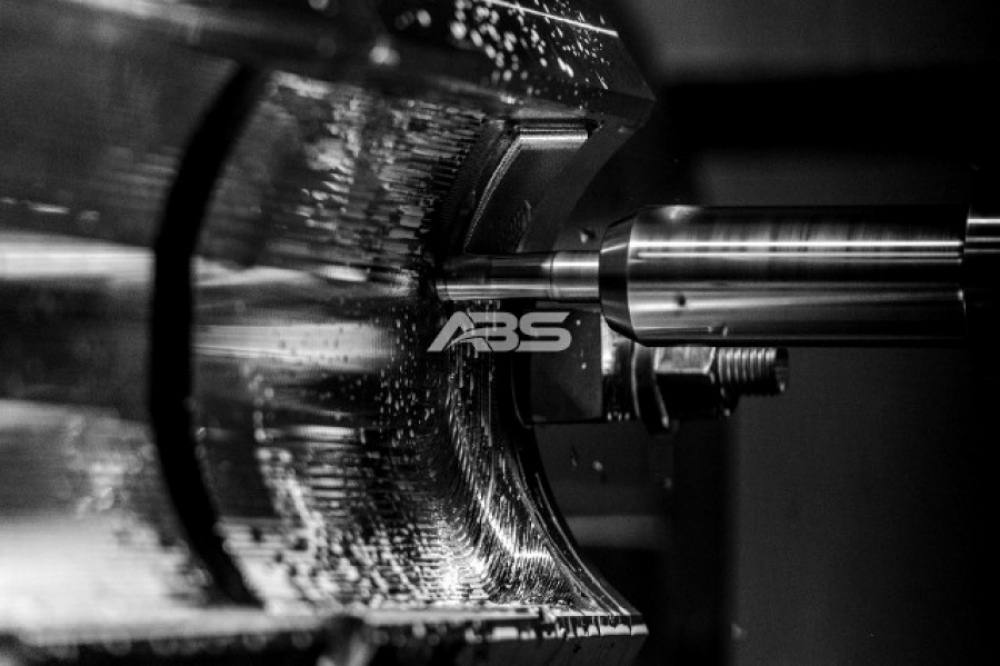 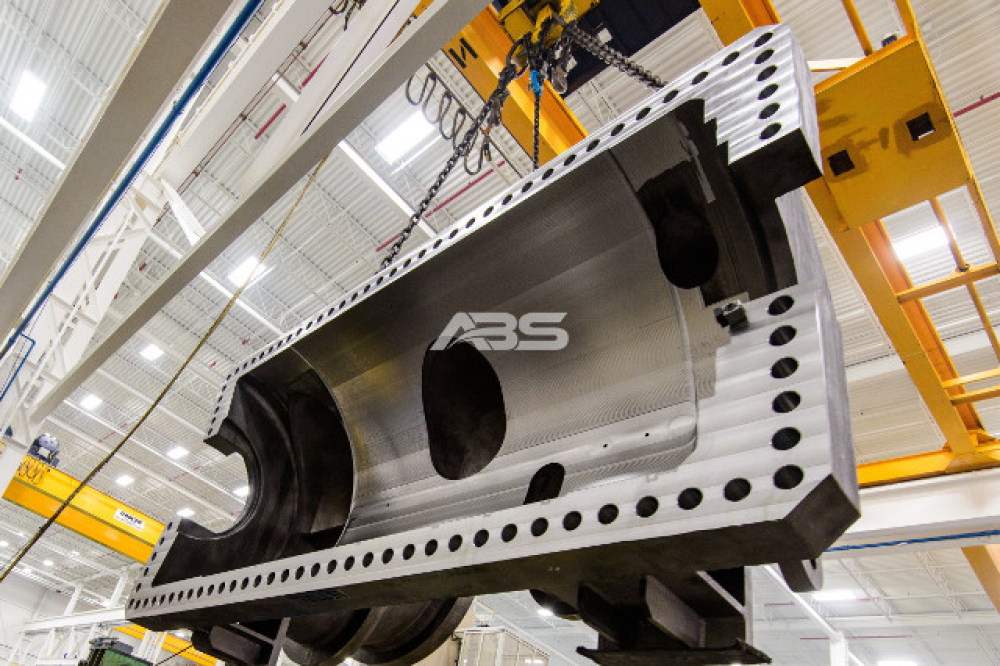 ABS is one of the largest and most advanced manufacturing companies in North America.

6 Plants with lifting capacity up to 160 Tons 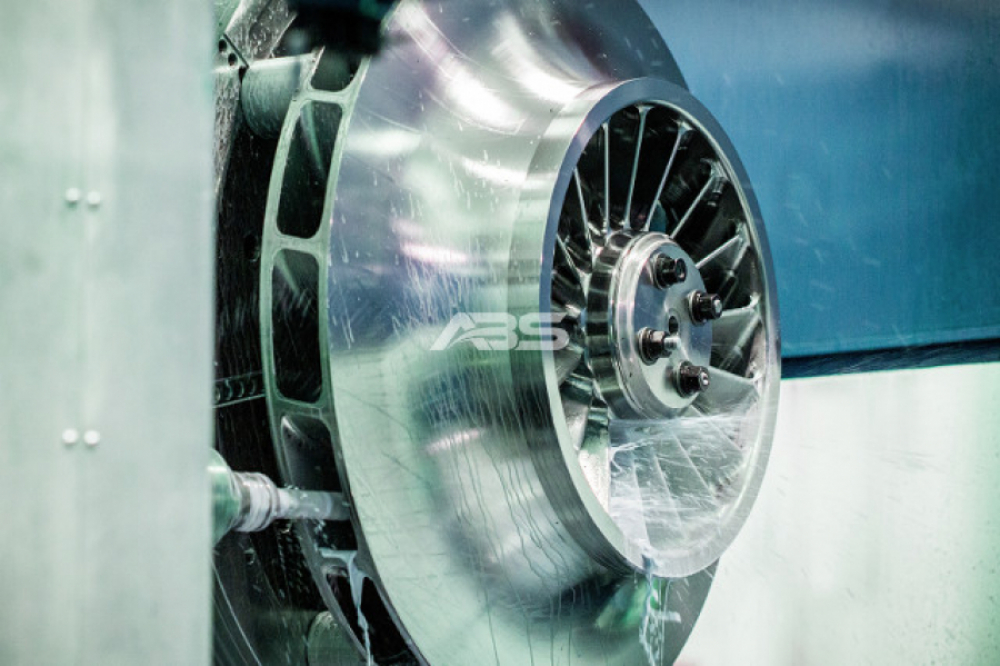 The ABS 5-Axis machining department has been built from the ground up with our customers’ needs in mind. 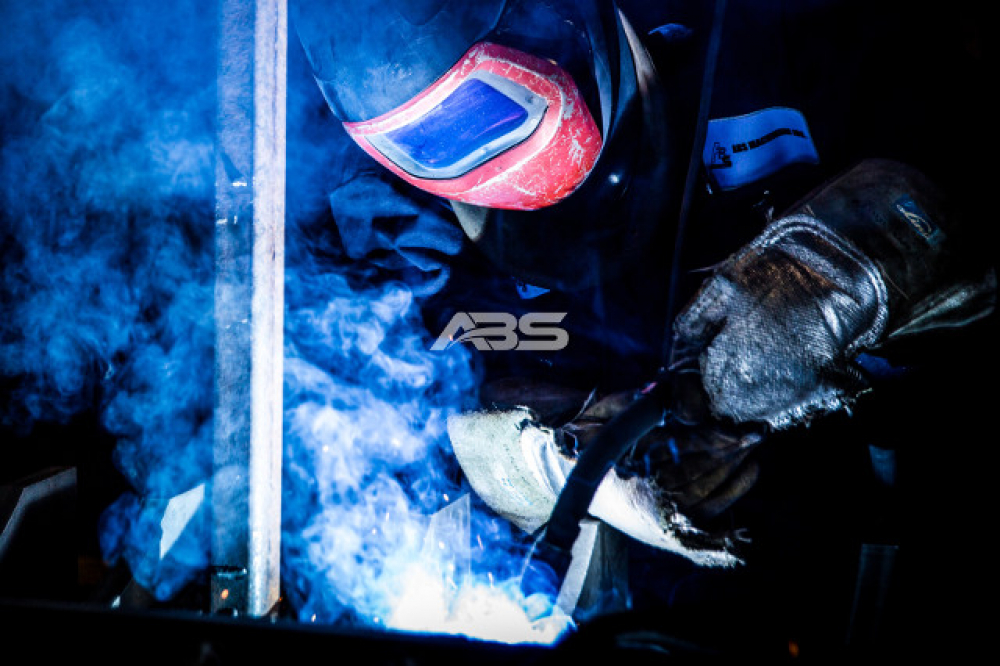 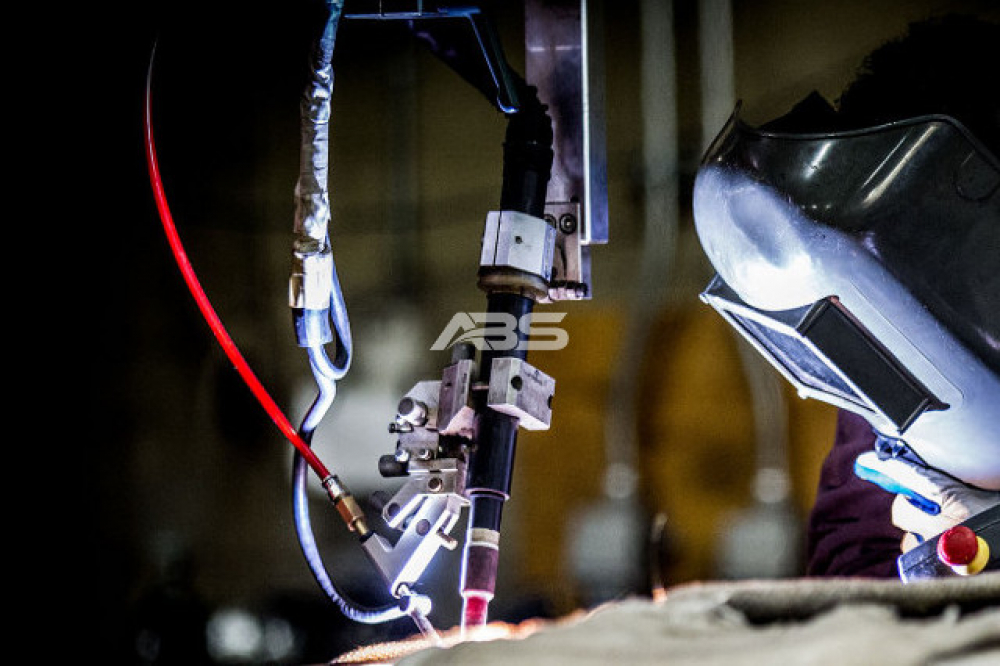 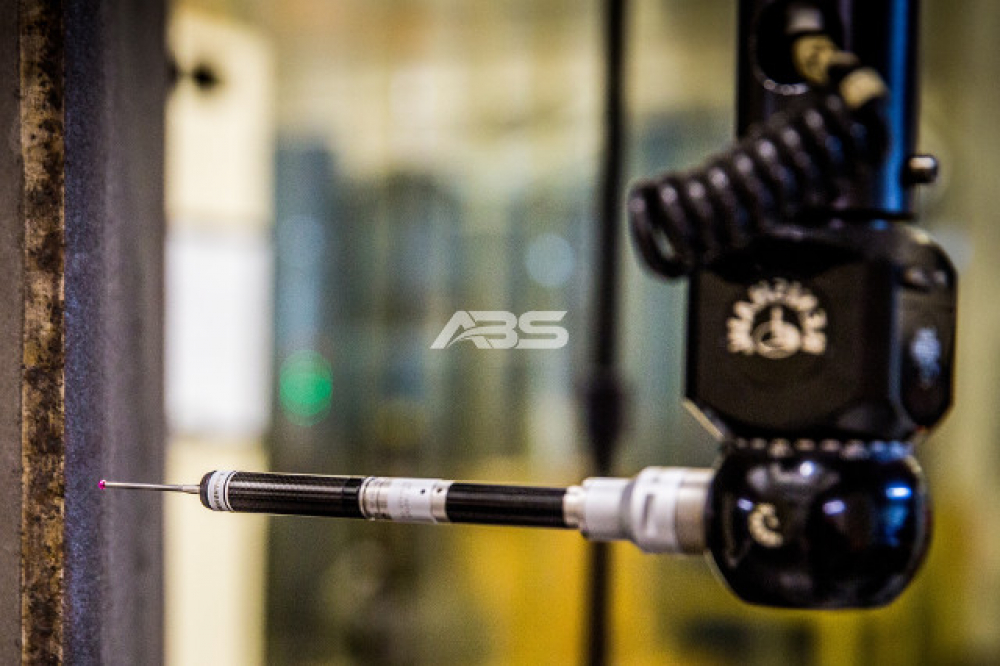